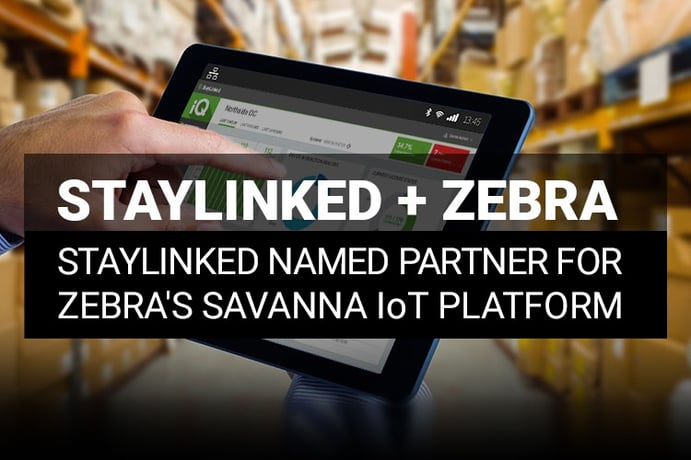 On September 26, Zebra unveiled Savanna, a real-time visibility platform that gives Zebra hardware customers insights into certain asset and operational data sets, and announced a partnership with StayLinked to bring this unique value to their customers.

In recent years, new operating systems (Android and Windows 10) and new innovative device form factors (e.g. Zebra's TC8000, which lacks a physical keyboard) have introduced major changes into this space. StayLinked's collaboration with Zebra has increased significantly and some of these new features (e.g. StayLinked SmartTE and StayLinked Smart Keyboard) have made vast improvements to the user experience on these new Zebra devices and have helped significantly with Android adoption across the industry.

StayLinked’s most recent innovation is StayLinked iQ, a product which delivers intelligence and actionable insight to Terminal Emulation customers. "Most of these TE environments have been starved of valuable information over the past 15 years," says Padraig Regan, who guides StayLinked Labs, an innovation-focused research and development group within the company. "Now, we can provide our customers with real worker productivity data and highlight what actions need to be taken to improve and maximize productivity. There is a lot of anticipation and excitement in the market around the product which is due to be released commercially in the first quarter of 2018."

Terminal Emulation solutions have, for the most part, been mired in stagnation for the past several decades. Green screen applications have been slow to evolve, even as the industry has matured. With new features, such as the transparent keyboard, dynamic pattern recognition, and rich graphical elements and interfaces, StayLinked has emerged as the leader in Terminal Emulation innovation.

Recent innovations have yielded modernized features for Zebra's state-of-the-art devices that have allowed customers to leverage the features of touchscreen devices by increasing productivity without sacrificing usability.

As one of only five Early Adoption Partners chosen by Zebra on the Savanna platform, StayLinked's commitment to innovation and customer productivity continues. StayLinked iQ is recognized as an emerging solution for total visibility into the business processes of the warehouse, including productivity measurements never before available.

"StayLinked has delivered the best-of-breed solution into the TE space for the past 13 years," says Regan. "A large proportion of our customers run StayLinked on Psion, Symbol, Motorola and Zebra devices. We have always needed to have deep integration into their device architectures in order to deliver the resilient and reliable solutions that we are known for."

Zebra has also been delivering visibility and insight into their customers as part of their Asset Visibility Service (AVS) / Operational Visibility Service (OVS) offerings. "They have just announced the next version of their intelligence platform: Savanna," says Regan. "They have also announced that StayLinked is one of only five partners globally who they have selected as early adopters of the new platform and we’re delighted to be strengthening our relationship with them in this way. We share a common vision for this opportunity: to combine the valuable and complimentary data sets that we both capture and to deliver everything our joint customers need to optimize their productivity."

“This is an exciting next step in our ongoing collaborative partnership”, Regan continues. “We work very closely with our customers, partners and OEMs to solve their real-world problems and deliver real value through our products. StayLinked iQ is the next innovation which will benefit every single one of our customers and the broader mobility space. Zebra’s vision for Savanna is complimentary with our vision for iQ. Combining what we both know about the customer’s environment will allow us to deliver much clearer and more comprehensive information to them, allowing them to truly optimize productivity. This is a great example of where 2 + 2 = 5.”

A Strategic Alliance for the Future

According to Zebra's recent press release, "With the continued adoption of mobility and the Internet of Things (IoT), the edge of enterprise operations are becoming increasingly connected. This unprecedented, growing level of connectivity is generating vast amounts of actionable data about processes and assets that can be leveraged to transform workflows to improve business performance and outcomes. Savanna provides a means for Zebra, its partners and customers to build applications that make use of this edge data in near real-time to mobilize insight and actions that deliver new levels of service, productivity and profitability."

Determining how warehouses, workers, and devices perform has always been a mix of intuition and instinct. It’s easy to recognize failure when the entire network goes down, or if an employee misses a shift, or if a device refuses to reboot. But that’s hardly a blueprint for optimizing your business processes.

As mentioned, one of the more recent innovations conceived by StayLinked Labs, the StayLinked Smart Keyboard, was developed in close collaboration with mobile device manufacturers, including Zebra, specifically for cutting-edge devices (e.g., Zebra’s TC8000 and WT6000). StayLinked's Smart Keyboard is the first keyboard of its kind and allows users to maximize productivity on devices with touchscreens and no physical keyboard.

With the StayLinked Server and the StayLinked SmartTE client, you now have insights into your business processes that were previously unattainable. And because of the StayLinked architecture's centralized design, your warehouse can embrace cutting-edge advancements (such as drone technology and augmented reality) to not only keep pace with current trends, but to move your applications into the future. StayLinked will allow you to interface with these technologies to gain visibility into how they are improving your processes and where they may be having difficulty. And because of the StayLinked partnership with Zebra's Savanna platform, customers now have the benefit of enhanced and extended capabilities for their warehouse environments.