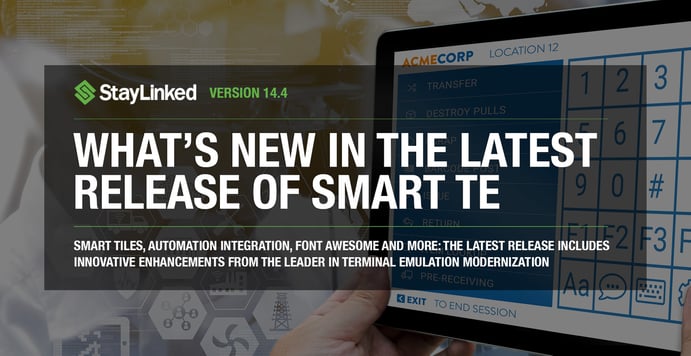 In response to the demands of the increasing trend of Supply Chain applications migrating to Android mobile device environments, StayLinked has unveiled new features in the industry-leading terminal emulation modernization platform, SmartTE.


As you may have experienced, StayLinked SmartTE is the revolutionary Terminal Emulation (TE) Modernization solution that is fueling the massive migration from Windows-based devices to touchscreen Android mobile devices in the supply chain. In this release, v14.4, we're proud to introduce innovative features further cementing SmartTE as the premier TE Modernization solution for the industry.

One of the key features is StayLinked Smart Tiles which are an innovative approach to the touch-only user experience allowing the creation and maintenance of custom keyboards, custom toolbars, or any collection of buttons at a layer above the application.

"As the industry moves to touchscreen Android mobile devices, existing applications must migrate as well," said Dan Hogan, President, StayLinked. "This release further establishes SmartTE as the most advanced - and only viable - TE modernization solution in enterprise mobility."