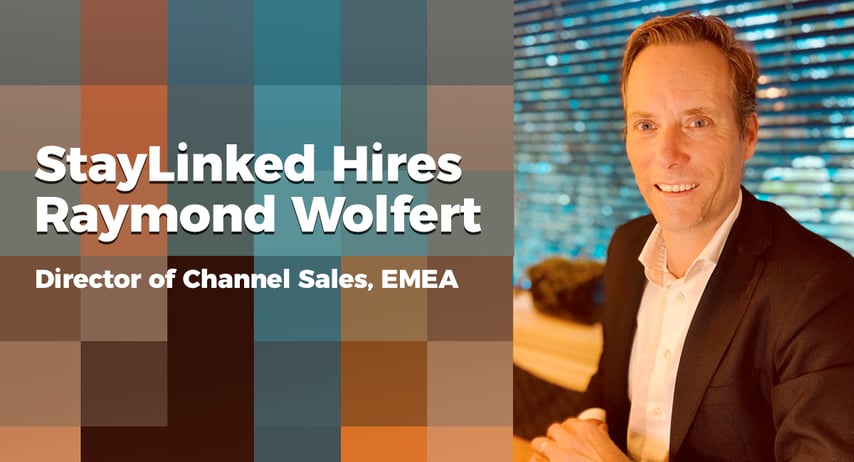 We are excited to announce further expansion to our presence in Europe with the hiring of Raymond Wolfert as Channel Sales Director in the EMEA region. For the past 12 years, Raymond has been working for Zetes/MCL as the director of Strategic Accounts and Alliances. He is a well-known and respected representative within the European Partner community, interfacing with many of the channel partners StayLinked currently works with. Raymond brings his exceptional background and experience in software sales and partner management to StayLinked and will be responsible for channel sales in Northern Europe. Raymond will also have a great impact on StayLinked’s efforts to continue building our relationships with OEMs in EMEA.

StayLinked’s continued growth comes in response to rapidly increasing demand for StayLinked products in Europe. Companies are continuing to rely on StayLinked for innovation as well as the ability to easily migrate to the Android operating system and the reliability and security of the StayLinked architecture.

"We are very excited to strengthen our European presence," said Ron Caines, StayLinked’s Vice President of Channel Sales. "And we are fortunate to add Raymond to an already strong and established European team. His experience delivering productivity-enhancing software solutions is well-known throughout Europe and will prove invaluable in increasing StayLinked’s growth in the region."

"Raymond is joining us at a very exciting time for StayLinked," says Padraig Regan, StayLinked General Manager, EMEA. "We continue to enhance our reputation as thought leaders and innovators. We're bringing new products to market which will allow our Channel Partners to deliver true value-add to all of their Terminal Emulation customers. We're evolving, fast."

As StayLinked continues to expand its product offering with a new enterprise-grade warehouse analytics and integration platform, Raymond will be focused on educating StayLinked partners in the region on how to enable their customers to enhance their existing warehouse systems with state-of-the-art technologies such as autonomous robotics, augmented displays, hands-free scanners, advanced automation, and more.

“StayLinked have always been at the forefront of embracing emerging technologies,” Raymond explains. “They continue to find new ways to improve the productivity of these complex environments with elegant solutions that don’t require proprietary approaches or the high cost of development that comes with it. StayLinked allows customers to make bold leaps with minimal risk and at a reduced cost without having to re-engineer the entire system,” he says. “And their support, without question, is unparalleled.”

Everything you need for TE in your warehouse can be done with one StayLinked server. That means that installation is easy (less than 10 minutes) and maintenance is minimal. With StayLinked, upkeep is easy and inexpensive, and because it's tightly integrated, administration is simple.

StayLinked is the proven market leader in Terminal Emulation for the supply chain industry and continues to drive innovation with the most advanced software solutions available for the warehouse. StayLinked enables our customers to easily migrate to state-of-the-art devices, measure and optimize productivity with cutting-edge business intelligence, and interface with ground-breaking technologies in the areas of automation, robotics, augmented reality, and location-based services. For nearly two decades, StayLinked has continued to deliver revolutionary software products with unparalleled customer satisfaction and world-class support to hundreds of partners and thousands of customers around the globe.