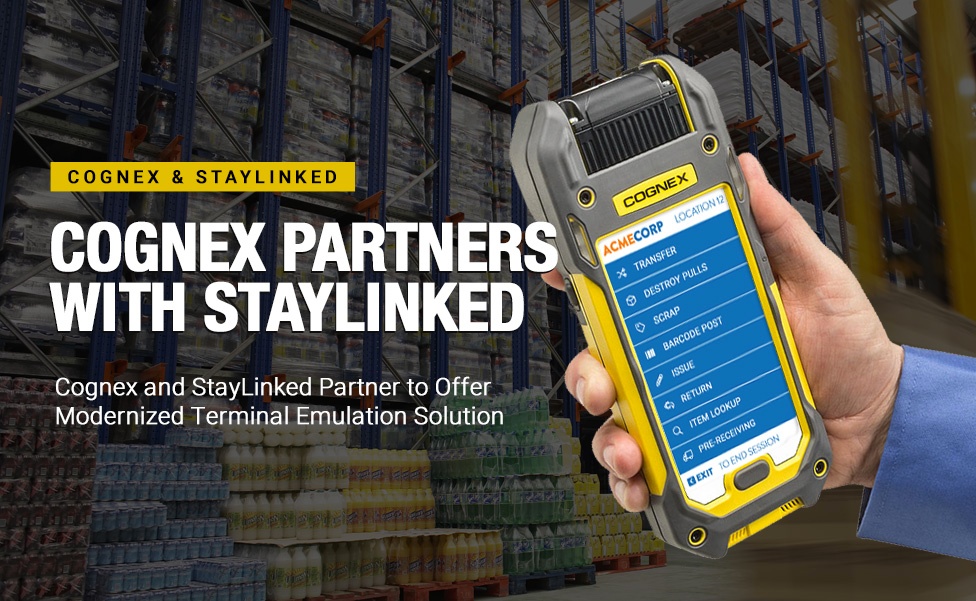 The unique architecture of StayLinked Terminal Emulation connects mobile devices to host-based applications such as Warehouse Management Systems (WMS) and Enterprise Resource Planning (ERP) systems in a very reliable, secure, and high-performance manner. StayLinked SmartTE delivers the best possible user experience on touch-only devices allowing workers to utilize the entire screen, without sacrificing usability for the sake of screen space. Customers retain all their application's functionality, which enables seamless migration to Android and to new state-of-the-art Cognex handheld computers without ever having to touch the host application.

"We are proud to partner with Cognex and help expedite market migration to the Android operating system on touch-only devices," said StayLinked President, Dan Hogan. "Using StayLinked on these devices enables customers to migrate and modernize their Terminal Emulation applications and, with StayLinked iQ, gain deeper insights into their business processes.”

Equipped with smart barcode reading algorithms and optics, the Cognex MX-1502 quickly adjusts between standard-, long-, and extended-range scanning to reliably decode 1-D, 2-D, and direct part mark (DPM) codes from as near as 15 centimeters to as far away as 10 meters. Like the MX-1000, the MX-1502 mobile terminal offers a modular, rugged design that supports iOS® and Android® devices and can be used in even the most challenging warehouse and factory floor environments.

SmartTE: The Most Advanced TE Modernization Solution in the World

You may have seen some of the vendor-specific solutions that claim to modernize your backend application on your device with ease. But if you talk to anyone who has actually tried these software approaches, you’ll often hear the same refrain: It doesn’t work. At StayLinked, the folks we’ve talked to who are actively looking for an alternative are amazed at not only how well SmartTE works, but how easy it is to use.

With StayLinked SmartTE and Cognex, you can quickly and easily apply touchscreen capabilities to your warehouse devices without ever touching the host application. We know that designing every single screen in your Terminal Emulation application is not only ambitious, it may not even be necessary. Using the Dynamic Screen Generator, SmartTE allows you to instantly 'buttonize' your menus, allowing them to be used on touchscreen devices easily and instantly.

And StayLinked Works on Any Operating System!

At StayLinked, we’ve worked hard to make sure that your legacy Terminal Emulation apps can take advantage of what Cognex devices have to offer, even without a hardware keyboard. That means that no matter what new hardware you decide to use, StayLinked SmartTE just works.

Just as importantly, StayLinked works on every major operating system: Android, iOS, Windows10 and even Java. So when you decide which hardware and which OS to use in your warehouse, StayLinked is committed to making sure that your apps not only work better, but that you can focus on making tough hardware decisions without having to worry about which software to run. Because in the supply chain, as we all know, each warehouse is different.